“Do you really want to do this?” Michael asks.  He knows that I hang on to images.  The Hanoi Hilton.  Treblinka.  Hiroshima wiped me out for a week.  I couldn’t eat, close my eyes. Man's inhumanity quite literally makes me sick. 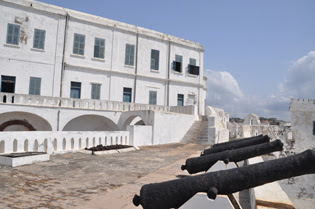 So, we take a cab to one of the castles that housed dungeons that kept male, female and children captive, 200 to a room the size of your average subway (only without the windows, the flush toilets, or the fresh veggies), for periods of a few days to 3 months until the imprisoned Africans passed down unlit stone passageways to The Door of No Return and onto small boats similar to the fishing boats still in use, to ships that would take them through the middle passage to North and South America. It is the same one that the Obamas visited when in Ghana.

“Africans were stronger,” our guide explains.  “They were more able to survive harsh working conditions on the plantations rather then simply enslaving the indigenous peoples.”

I slip and almost fall as we descend into the men’s dungeon.  The floors are slippery, a muddy looking covering over the cobblestone floors as thick as asphalt.  This, she explains, is the caked residual of blood, vomit and feces from the nineteenth century.  I feel nauseous and disoriented by the darkness as she switches off the light for less than a minute. 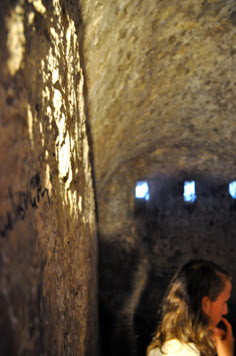 In this picture, a young Dane contemplates the magnitude of what we are experiencing and the guilt that all of European descent must bear.

Directly above the cries from the dungeons stood (stands) canons pointed out at sea and a church, where the overseers prayed for peace and redemption.  A trap door is in the entryway so worshipers could look down and check on the status of the imprisoned before taking communion. Redemption indeed.  Were the overseers clinging to guns and religion on this rock thinking they were worshiping on some high ground?  I stand there trying to pull logical thoughts together in the blasting wind. Later she takes us down to visit The Door of No Return, which she unlatches and swings open.  Our little tour group steps out into the blinding sun to imagine what it might have felt like for the departing prisoners of slavery. 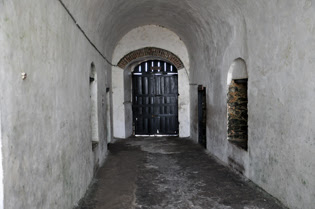 Our guide is a soft-spoken volunteer who tells us about the five graves in the open yard of the castle.  These were not for slaves that succumbed to the horrors, those folks were either buried in a mass grave or thrown to the sharks.  Instead, this is the final resting place for four white guys who mostly succumbed to malaria along side the body of one woman.  She was the wife of the head overseer, who arrived at Cape Coast only to find out her honorable husband was getting it on with a local.  There are three theories why she died. 1. She found out her husband had been unfaithful and did herself in.  2. She too succumbed to malaria.  3. Her husband's mistress poisoned her.  “Which do you think?” the guide asks me.

“Murder.” I reply.  Our kindly guide does not agree, She thinks malaria or maybe the woman died by her own hand.

Later we have a few minutes to ourselves.  She is slight, young, leading our tour with compassion and exquisite detail. A striking beauty with her braids piled high on the back of her head.  She is well educated, her English impeccable.

“I would think the locals would have wanted to kill all the Europeans, they were so wretched to them,” I speculate.  She has already told us how some greedy chieftains had been complicit, trading their enemies and even members of their own tribes for payments by the European slavers.  She patiently reminds me that the Europeans and their clients in the Americas were not acting alone.

“I don’t care,” I say.  “I would have blamed the Europeans and wanted to kill them all.”

She reaches up to gently take a blond strand of windblown hair that has attached itself to my angry lip and tries to tuck it behind my ear.  She speaks to me of the power of forgiveness.  She says that it was the Europeans who brought Christianity to Africa and for that Ghanaians must always be grateful for that gift.

I have always thought the missionary movement in Africa to be an epic case of presumptive arrogance, but I try and see it from her side, especially since her side comes from such a loving place.

Tonight as I write this I am still trying to digest all that we saw there: the overseer’s bowed bedroom with 14 windows to catch the cross breezes from all directions, the special dungeon with no windows for rebel men who were locked up and usually suffocated within two days, to the special dungeon for women who would not submit themselves to the sexual whims of the guards.  They didn’t suffocate those women, just starved them and kept them cooped up for years as a model lesson for incoming females.  I am digesting, but I am not so sick as I might have been.  I keep thinking of the deep walnut colored eyes of that young woman speaking to me about how we need forgiveness in our hearts in order to progress.

“We must forgive others of course.  But it is just as important to forgive ourselves.  This is how we go forward.” 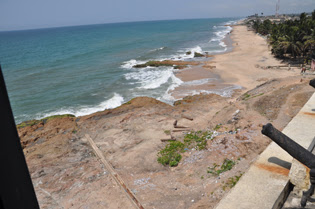 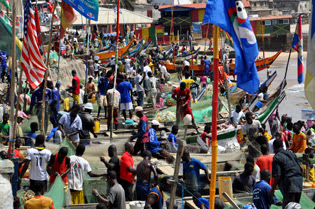 I will remember the sights, the heat, and the kindness and good humor of the people of Ghana. We were made to feel very welcome. I will remember the close quarters of those dungeons and our guide's hand brushing my cheek and her observation that forgiveness is always a component of progress.

Thank you to Lincoln Community School and particularly Rhona Polonsky for helping us plan this side trip.
Posted by sara holbrook at 8:18 AM