No rushing, no deadlines. The cats are out, the dogs are in. Summer is slowing down to turn the corner into fall. School is open, the pool is closed. My neighborhood is far from peaceful.

Mentor's school district is in financial crisis and decided to sell our neighborhood school at the firesale price of 700,000. Last week the backstops for the ball park came down, so sad. A developer has purchased it and wants to put an unbelievable 127 units on the property. This is a very old neighborhood, doesn't even have storm sewers. In order to have storm sewers, all of our ancient trees lining the streets would have to go. 127 cars added to the busiest intersection in town during rush hours. Quiet streets disrupted. www.mentorvillage.org

The odd thing is, the only thing council seems concerned about is Rick Osborne's right to make a profit. The entire discussion revolves around, how can we enable him to make a profit with fewer units. Naturally, the council people take plenty of money for their campaigns from this developer and his wealthy family. It is a microcosm of American politics.

With a 7.5 month housing sales lag in the Cleveland area, we hardly need new condos. Want and need. Who benefits? Global questions on a local scale.

It is important to fight on a local level -- maybe there will be trickle up benefits if we win in our resistance move. Hope springs eternal.
Posted by sara holbrook at 10:08 AM 2 comments:

The book is at the printer. There are hardly better words an author can hear. It means all the work that the writer can do is done. Books start out in pieces, ideas, outlines, proposals, chapters, rewrites upon rewrites and then they come back in pieces, galleys, designs, finally, a printed cover. Then there are calls from friends, "hey, I saw your new book advertised." Thursday we received an extra piece, a copy of the DVD of Michael working with his kids at Playhouse Square and going to the Youth Slam in NYC. The DVD will be included in the book and its production has actually delayed the production of the book by a month or so, but now seeing the DVD, the delay is so worth it. I only have a blip of a non-speaking role in the DVD. The most powerful moments in it are the interviews with the kids. I know there are lots of DVDs about slam floating around, but most of them are geared to adults and spoken in VERY adult language, what my grandmother used to call "sailor talk." But this DVD gets the fun and teamwork message of slam across in classroom ready form. The kids are soooo great. It made me cry.

Three more weeks they are saying and we will have the finished book and the DVD all packaged together in one piece. In our hands. With other projects now in pieces, it's important to take a minute to just sigh and feel satisfied.

Oh. And wait for the reviews. Yish.
Posted by sara holbrook at 8:51 AM No comments:

Home is where the washing machine is

Outgoing suitcases are a study in organization. Socks in this pocket, folded jeans, t shirt rolls framed by shoes turned business side out. Incoming suitcases on the other hand look as if they have been gathered from trees, bushel basket dumped then stir fried. Unappetizing at best -- and after a day of serving as an open-mouthed cat bed, they wander sheepishly, piecemeal into the laundry room trailing loose hair. And even though I know the answer, I just want to hiss through a curled lip, "where have you BEEN?"

Still, I'm okay with that. It's what is at the bottom of the suitcase that drives me nuts. The receipts that need to be sorted, wrappers, loose brochures and business cards, ubiquitous lotions and pens that all need to find homes. Even if that home is the trash, it all seems too tedious to sort through.

Called Continental to complain about the bigot in Austin. They were polite, told me he needed more training, knew exactly who had checked us in at exactly what time (a little spooky) and gave me a case number. 2967727.

Today we did banking and grocery errands on bikes -- no check-in needed. Sure is nice to be home.
Posted by sara holbrook at 4:49 PM 3 comments:

I could never be a migrant. First of all, my intestines tend to over-dramatize ingestions of bad food. Second, after a couple of days of that drama, I almost threw up with dehydration and heat exhaustion on a 2.5 mile hike on the desert trails. In order to hike from Nogales to Tucson, I would have to make it 60-90 miles to a pick up point.

Michael and I spent one afternoon in Nogales this past week handing out burritos, water and directions to shelters to deportees. Their stories will break your heart, families left all over the place, separated. (Please note, Michael ate all the same food I did, but he can scrape food off the ground and chew it like gum and it doesn't bother his insides. A really annoying characteristic in a partner).

Ed was our tour guide on another day. With his GPS and knowledge of the back trails we hiked around Arivaca, AZ. Ed knows everything. He is the former dean of arts and sciences at the University of AZ and a geologist. He knows it all, but is not a know-it-all; the perfect wilderness companion.

He also explained how corporations load politicians coffers so that they will not clamp down on the companies for hiring illegal workers at less than minimum wage, force those companies to pay for health care benefits or retirement, while simultaneously promising US citizens that they will work to protect the borders by building walls to keep out the workers the companies want. Caught in the middle are a whole lot of folks desperate to feed their families, willing to risk their lives for even low wages (upon which they DO pay taxes, but are unable to collect any benefits since they are not citizens). One has to only try and walk the terrain of the desert for a couple of hours to realize what desperation really is.

Did you know that there is no LEGAL way for a Mexican to apply to work in the US? I wonder why that is not discussed by the news people who want to put all the blame on the immigrants rather than those corporations, builders, cleaning companies, landscapers, manufacturers, which are really just trying to get cheap labor and bust unions?

Anyway. I tried it. The trails. I couldn't make it. It's official.
Posted by sara holbrook at 11:09 AM No comments: 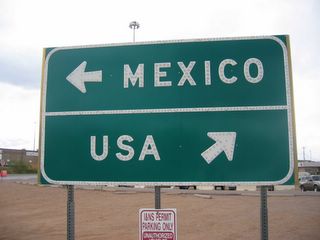 "And some go both ways" to quote the scarecrow.

Posted by sara holbrook at 8:59 AM No comments:

If an anti-semite is one who hates, disrespects, discriminates against Jews, what's the word for one who hates Muslims? We need a word for that, a shaming, Mel Gibson condemning, horrifying word.

As Michael and I were traveling from Austin to Tucson, we had an ugly encounter with a Continental ticket agent named Russ (we think) in Austin. We were chuckling with him about the new security procedures when he said, "You know what everyone is saying, this could all be eliminated if we did one thing."

I'm thinking, what -- give grandmothers and poets a free pass? We both asked him "what" at the same time.

"Eliminate a religion," was his shocking reply. He was smug. Efficient. Snapping staplers and drawing out adhesive luggage strips.

Michael and I looked at each other, knowing that this bigot stood between us and our destination. I opted to not say anything to him, but go over his head and write to Continental (which I'm doing next with a link to this post.) I hope they find a way to eliminate his job. Not him, just him in that position of authority.

We need to find a way to live in this world without the need to eliminate anyone. What's word for that? I think it is Peace.
Posted by sara holbrook at 12:05 PM No comments:

I entered the world of Slam poetry after some motivator told me that I couldn't, that it simply was not something that "middle-aged white women from the suburbs" did. I ran right out and signed up after that. Now, 11 years later, I went back to the National Poetry Slam in Austin, TX. This is the same location where Michael and I were on the finals stage in 1998. It was a hoot and a holler, as Austin always is. Instead of being competitors, Michael worked behind the scenes (a lot) as did I (a little). However we were both featured in a "Legends" showcase.

It was great to see old friends and hear some amazing new voices. Also really enjoyed hearing Whammo's band, the Asylum Street Spankers and their parody of "Tie a Yellow Ribbon 'round the old Oak Tree" only it is "Put Magentic Stickers on your SUV." I downloaded it from their website, it was my first musical download.

Okay, I'm a bit behind the technology on cybertunes. But, hey, I'm a legend, whadayaexpect?
Posted by sara holbrook at 11:40 AM No comments: