I wrote this poem for my daughter Katie when she tried out for a play.  She wanted the part of Peter Pan.  She got the part of the crocodile!  She also got a lifelong friend out of that little production and I think if you asked her, she'd say the experience was a positive one, even though the outcome was not what she went looking for.

We all try out all the time -- plays, sports, musical competitions -- the list is endless.  As a poet, everyday for me is an audition.  I'm submitting work to publishers, trying to win over audiences, and connecting with other writers, making plans.  I've always thought that being a poet is kind of like having a tag sale for my thoughts.  I lay stuff out on the table, people come and take a look. Some say, I don't need that. Some say, I have that at home.  And a few say, cool, I'll take that.  Sometimes life give me what I want, and sometimes I get the crocodile, but there are benefits to every experience.  Okay.  A few scars. But even those can make a good story or poem.

The important thing I have to remind myself of, just as regularly as the moon rises, is that I have to keep trying. It's scary. Sometimes it's just plain exhausting. Most times, I love the adventure of a new challenge.

I chose the changing colors of the sky to represent my moods when I think about trying something new.  Sometimes bright, occasionally dark, and ultimately sunny. This poem has been in two of my books: My very first book Nothing's the End of the World (now sadly out of print) and Zombies! Evacuate the School (Boyds Mills 2010).  But the thing I am most proud of is that Katie was chosen to speak at her graduation from Bay Village High School and she chose this poem as the theme of her speech.
Posted by sara holbrook at 5:55 AM 2 comments: 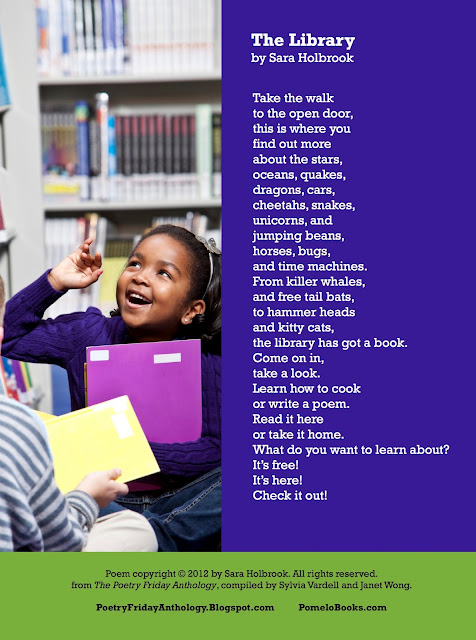 I was so excited that Janet Wong and Sylvia Vardell chose my poem to illustrate a brochure about their fabulous resource, The Poetry Friday Anthology.  In case you haven't heard about it, it contains 36 poems for each elementary grade level so teachers can introduce a new poem every Friday all year long.  And along with the poems are gentle lesson ideas.  By gentle, I mean the authors don't suggest you dissect the poor poems and use the pieces to choke the creative life out of kids.

Here is a suggestion to go with this poem (can you tell this came a librarian?  Not just any book geek either, librarian extraordinaire Sylvia Vardell).

"And here's an idea for a 5 minute activity: Challenge kids to pick a topic on this list that they are probably NOT interested in, to find a book on that subject, to flip through it for 1 minute-- and then to share one neat little thing that they just read or saw."

Here is another fact you might want to share...this poem was once rejected by an editor who told me flatly, "Sara, this is not your best work."  I mention this to inspire those who may be discouraged by the entire submission process (me included) to keep trying.

While I'm passing out compliments, let me also say that Janet Wong is a terrific editor, as well as a stellar poet.
Posted by sara holbrook at 1:59 PM 1 comment:

What's Real? A Poem About War.

Pictured between reruns
and what commercials want to sell,
explodes another war
in some far place
that I can't spell.

Every evening
around dinner
devastation
is served up with my meal,
then sprinkled with laughs and laundry powder.
Can you tell me
which pictures are real?

©1997 sara holbrook
Am I Naturally This Crazy?


Although the copyright on this poem is 1997, my database of poems tells me that I wrote it in April, 1991.  A different war. Or is it?  War is always unfair.  How would more bombs help this little boy? His family?

The book this first appeared in, Am I Naturally this Crazy, is out of print.  How I wish we could make pain and chaos that is war go away as easily.
Posted by sara holbrook at 11:13 AM 1 comment:

Emily, Julie and me. 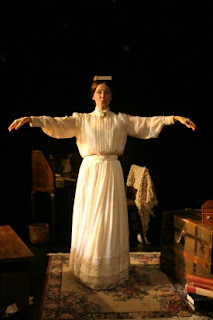 It was a winter day in the late seventies.  I had been struggling with the joyless parts of stay at home mothering and not particularly well.  I wasn’t fitting in with my new neighbors, the junior women's club, or the corporate wives’ club.  I didn’t play bridge that well and I never could manage to get my hair dry before the guests arrived.  Any passing attraction I might have had to matching finger towels was always counterbalanced by my ability to grow dust bunnies the size of raccoons while reading or daydreaming. I was having trouble finding my place in the world.

That afternoon, I put both kids to bed for a nap and sat down to watch a much anticipated re-airing of Julie Harris in the Belle of Amherst on public television.  No “on demand” in those days.  I had to scramble like a dog on linoleum to get everything in order for the 1:00 viewing on our 22 inch black and white television.  I rolled the metal cart over by the fireplace, adjusted the rabbit ears, lit a fire and sat.  Probably munching on a bologna sandwich on white bread.  It was a long time ago.

But not so long that I have forgotten a moment of her performance. Julie welcomed the audience with black cake and dry humor.  The cake recipe called for 19 eggs and somehow she made that a laugh line.  I cried with her when her beloved nephew died (by that point in the play Harris WAS Emily), rooted for her birds as she shew-shewed her sister Lavinia’s cats away, and cheered as she stood up to the status quo.  Her neighbors thought she was strange, and instead of compliance with their standards, she just returned the sentiment, brushing them off as housewives do a fly. Who can't admire that kind of starch in her white frock?

Emily wrote with no audience to speak of.  Pre-internet, pre-self-publishing (so public, like a frog), she wrote and studied words and put them in a box.  Having already experienced rejection from Highlights Magazine, I identified with her rejections.  With those who called her rhymes irregular, rhymes which she herself dubbed “experimental.”  I had recently been told that my poems “exacerbate the insecurities of youth, dwelling on self-interest at the expense of others,” which I thought sounded like something I could do hard time for.  We were simpatico, Emily and I.  Ironically it would be that very magazine’s book publishing arm, Boyds Mills Press, that did publish my first book 19 years later, but at that point in my life, facing rejections, dust bunnies, and a never ending river of diapers, I had (frankly) come a little undone around the edges.

Following this performance, I went downtown Cleveland and bought a properly leather-bound journal at Publix Bookstore.  Then I scrubbed out an antique wooden tool chest.  I read more poetry.  I copied poems onto index cards and tacked them up around the kitchen sink to memorize when my hands were wet and my brain was wandering. I studied the rhythm of language.  And my frazzled parts began to re-fuse. To this day, if I begin to fray, I know it is because I have not written for a while.  Not writing to sell, just writing to focus on what is real.

Subsequently, I would fill that tool box, floppy disks, CDs, hard drives, and now my space in the cloud. For all those 19 years, I would write, share with friends, and put the poems in the box. Harris-as-Emily had convinced me this was an acceptable pursuit. I developed my craft.  And because I wrote apart from the market place, I never sat down to write a single book containing 30 poems on dinosaurs or as a Scholastic editor once urged me, (gasp) on vampires. I have the meager monetary returns to prove it. I simply wrote what I saw and what I wondered about.

When Harris took her bow that afternoon, I applauded.  Right there in the living room.  Bounced up and down on the green flowered love seat clapping like a mad woman.  All by myself.  I applauded the performance and Emily’s spirit of rebellion, her ambivalence for organized religion, and her fierce love of family and words.  As a stellar performance should, Harris-as-Emily not only invited me in, but deposited a part of herself in my heart. I saw her later live at the Hanna Theater and the LP recording of her live performance as The Belle of Amherst is the only vinyl I have kept.  But that afternoon, just us in the living room, remains a sparkling blue sapphire in my frequently overdrawn memory bank.

For what she gave to the world in terms of dignity and skill and for the riveting thrill she gave me that afternoon, thank you Ms. Harris. 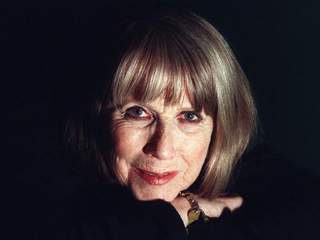