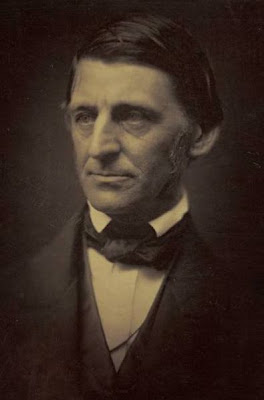 ‎"Finish every day and be done with it. You have done what you could; some blunders and absurdities crept in. Forget about them as soon as you can. Tomorrow is a new day; you shall begin it serenely and with too high a spirit to be encumbered with your old nonsense." – Emerson

I woke up to yesterday all over the kitchen, stray basil leaves and scraps of chopped pepper from cooking tomato sauce, leftovers that I didn’t sweep up before bed. Did Emerson always sweep the kitchen floor before bed? I don’t think so. Oh and yes, don’t forget the cloud of fruit flies darkening a bowl tomato trimmings that didn’t get taken out to the compost.

Let me ask you, did Emerson compost? If he did he would never make such a statement. This is, I mean, this statement is so smugly 19th century. What did ol' Mr. Leisuretime do to combat global climate change caused by (hello) Yesterday.

Did Emerson ever wake to 37 emails that penetrated the spam filter over the night like fruit flies through window screens, or wherever fruit flies and offers of wealth and health fly in from. Did he never eat out and two weeks later find a styrofoam container growing like a science experiment in the back of the fridge or a preposition dangling at the end of a sentence he had written? Eh?

He probably never filed an extension on his taxes, either, so he could have the water-torture joy of waking to unfinished homework for five months every year. A milk crate full of receipts moaning like caged zombies under the desk. Unopened financial statements that made him regret he never got an advanced degree in accounting. And don’t forget the 187 pieces of correspondence populating his inbox that really should be answered.

Oh. And who do you suppose was the “high spirit” he woke up with every morning? No one who has ever lived with another human being for longer than a week expects to be greeted with sunny smiles every dang day. Sounds a little lascivious, Ralph Waldo. If the Reverend and his “spirit” woke up high, isn’t that just evidence they didn’t sleep long enough? Bet his two wives (the ones who probably swept the kitchen for the "individualist") loved THAT story.

Okay. I’m willing to admit that even though I have some questions about Emerson’s philosophy, I do not have all the answers. I’m going to slap a label on the coffee pot, rename it “serenity,” slug down a couple of cups, make a wide sweep of all the “yeah, buts” off my desk with the back of my arm, and start the day over.

Here’s where I should conclude this philosophical rant with a summary statement about fruit flies, but what more can really be said? They exist. Deal with them.
Posted by sara holbrook at 7:46 AM 2 comments: 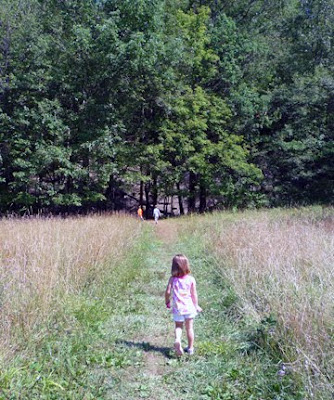 August light turns in by eight
and night comes early in the forest
lullabied
by crickets' chorus,
shrilly sung crescendos
by a choir that no one sees.

A piece of poem.
Don't know when I wrote it, but when ripened tomatoes start to sag on drying vines and shadows begin to lengthen in late afternoon, it floats through my mind, looking for a place to go. 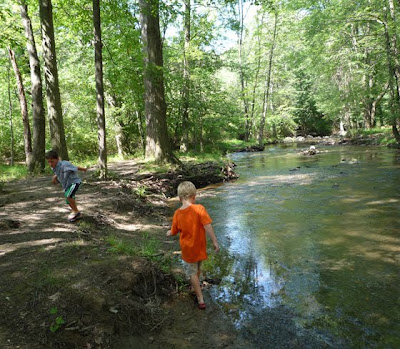 Last week Danny, Scotty, Sara and Thomas and I went creeking. I've talked to many teacher groups about this creek. How on one frosty Easter morning I used my walking stick to roll one rock on top of another so I could tip toe across and not get my feet wet.

I asked my friend, is that fair? To move the rock like that? Maybe we should just play them as they lay. "I don't know," she answered, "if I were a rock, I wouldn't want to stay in the same place for the rest of my life." 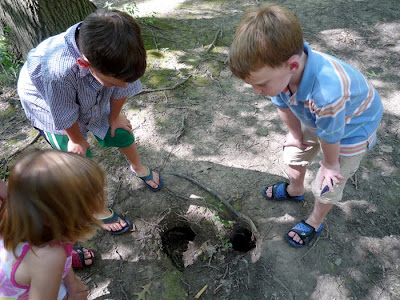 I went home and asked my daughter Kelly what she thought. Was it fair to move the rock? She reminded me that there were organisms living under that rock. Move the rock and you have disturbed the habitat. So I asked her football/golfer boyfriend (soon to be husband) Brian, and he said definitely, no. You move the rock, you take the sport out of it. 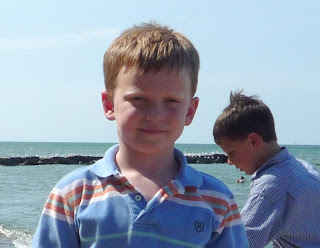 So, on this hot August day, no frost to be found, I visit the same creek with two of their sons, Dan and Thomas. We talk about whether to take the high road or the low road beside the creek. We confer with Scotty and Sara. And we all manage to round the bend and follow the creek with (mostly) dry feet, even though the mud DID try to suck the shoe off of Dan's foot during one rock maneuver. Life, like the creek, is constantly moving on.

Back then I also asked my friend Sharon Draper in an email, what did she think about moving the rock and she quick shot back an answer, "Jackie Robinson moved a rock and everyone has been following in his footsteps ever after."

Good answer. I asked other friends. I asked Father Ned, who answered, "We are co-creators in this universe, move the rock." That turned out to be my favorite answer. We are co-creators. And while it is up to each of us to make our own way, It sure helps to have friends and family to talk over the possibilities. 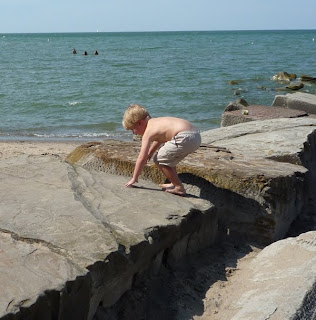 About which rocks can be moved and which we need to climb over. 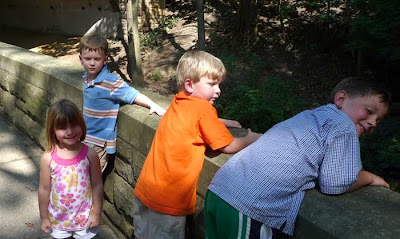 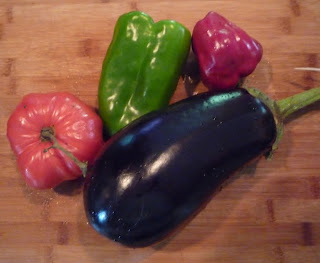 A few weeks ago a teacher from TN wrote and asked me for the poem about the creek. Like the August poem, it is just a little piece of poem. Never fully developed. Just a little story, a memory to savor like the tongue-burst of backyard, sun-ripened tomatoes. 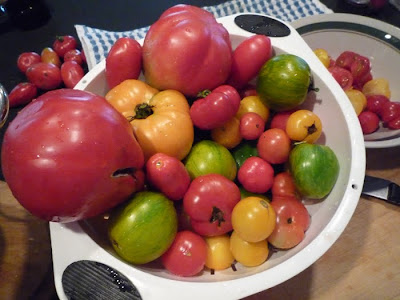 Posted by sara holbrook at 6:48 PM No comments:

Zombies! The Making of the Video

A good introduction can go a long way toward making a positive first impression.

I was so excited when I saw the drawings Karen made to go with my poems. They seemed to be dancing all over the page. I wasn't sure about the music they were dancing to until I taught myself Garage Band. I played around with sound effects and music clips, cutting and pasting until I thought the beat matched the movements. It took me all kinds of hours to learn the program, but I had a crash, bam, boom, foot-tapping time experimenting.

At the same time, I taught myself to use the program I Movie. That process took a few days and several large containers of popcorn just to get me into the proper mind for movie making.

I didn't have a script to begin with. Just some vague thoughts about how important it is to daydream and then my eyes landed on Karen's picture of Susan Todd singing her heart out. And I thought, that's it. I want kids to know that this book will help them find their voices through poetry. So that became the plot of the video.

Hope you enjoy the video, the book, the poems, the pictures, and that the writing tips put you over the top just a little.
Posted by sara holbrook at 2:43 PM No comments: 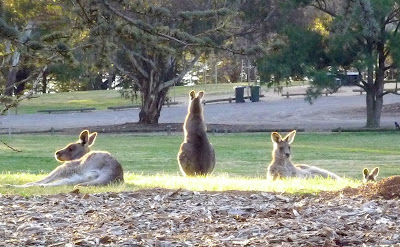 Singing "kookaburra sits in the old gum tree-ee" makes a whole lot more sense if you have heard the mouthy bird and understand that a gum tree is a sweet smelling eucalyptus. The "baaa necessities" become more clearly defined when you learn that Aussies drop most r's, don't run the heat when no one is at school, wear locally grown wool for warmth instead of layers of useless manmade fibers and elect local officials based on their environmental policies. Also, knowing that a mob is a herd of kangaroos and not criminals with machine guns helps to make the school chaplain's blessing a bit less startling at second period tea time, crumpets optional (but who can resist?)

We started our visit in Australia with a couple of bus hopping, ferry riding, opera house touring, zoo visiting days in Sydney. The winter here is mild and incredibly sunny compared the kneedeep wind chills we are accustomed to in Cleveland. Not unpleasant at all. Much more to see. Would love to return.

The opera house is truly stunning and we were lucky enough to score tickets for a cabaret performance in one of the theaters. It is covered with tiles that reflect the color of the sky, a site that really can't be captured with a camera.

After a smooth bus ride to Canberra, ACT (the Washington, DC of Australia) we were collected by our trusted friend and host, Dan Ferri. He not only put up with us but put us up for a week and a half while we toured Canberra (pronounced Can-baha, see above) and Radford College. 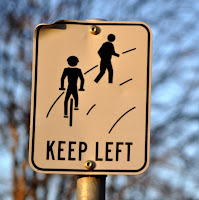 Before we began our residency at Radford, we took about an 8-kilometer walk to the national Australian Museum. Since I don’t know a kilometer from a mile and we didn’t have a map of the city, we didn’t exactly know what we were in for that day, but it turned out to be a clear blue sky, sunny day and a fascinating museum where the modern is mixed up with the ancient to give you a picture of just about everything Aussie. The War Memorial was particularly fascinating as they had a C plane there that I think is what my Uncle Bill flew in the South Pacific. Somehow it was not part of my history lesson that Australia was bombed and Japanese subs were in Sydney Harbor during the WWII, "let's move on, we have a lot to cover" being the hasty mantra of all my social studies teachers 1-12). 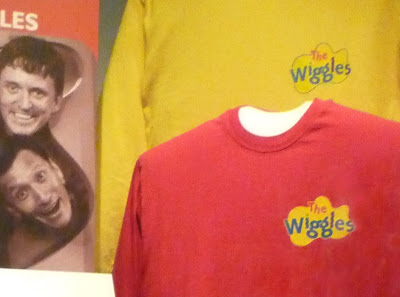 Yep. The Wiggles. Hanging alongside pith helmets, Darwin’s notepad, and aboriginal masks. Oh, well. No worries, mate. One of a couple of handy phrases I picked up and reckon to remember along with the mobs of meat pies and kangaroos, smiling students and pleasant teachers we came in contact with while down under. My absolute favorite, below. 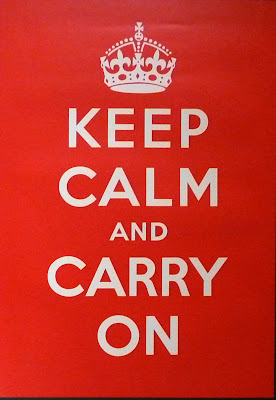 But the real business of our trip began when we went to school. First we did a short drive by visit to a public school, Ainslie School where Karen took us all around. The place was alive with writing and word walls, artwork and bulging classroom libraries at all grade levels. Here I learned that a perimeter is always closed, never open and not a muddle. Principal Jo Padgham was away the day we visited, but her imprint and vision is clearly evident all over the school, a very happening place. 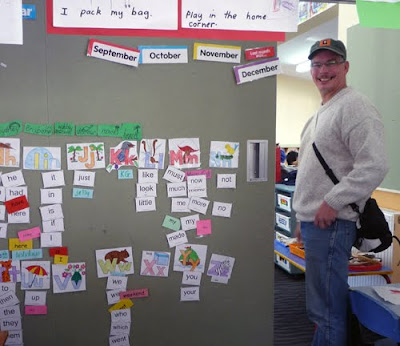 The next day we began a five-day residency at Radford College. In Australia all schools are colleges, post high school schools are called universities. We visited with the elementary kids, a few year 12s (seniors) but spent a great deal of our time with the seventh grade. The sixth graders wrote about their recent walkabouts to visit local dams and ecosystems. I learned about the hazards of desalination from one sixth grade poet and about all kinds of other fascinating creatures, plants, and rivers (few of which I could spell in the group-writes much to the amusement of the kids). 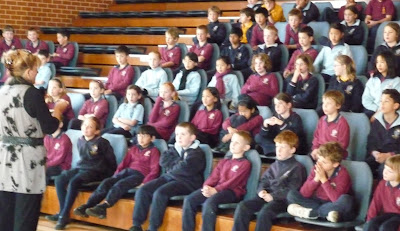 Many many thanks to Claire, Peggy, Louise, Dylan, and the rest of the mob for making our visit a learning experience for all. And special thanks to Dan Ferri for the invitation and for all his generous hospitality. 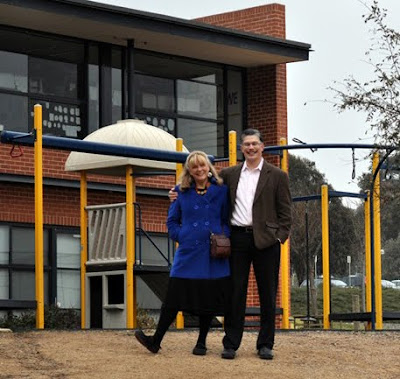 Posted by sara holbrook at 12:46 AM No comments: