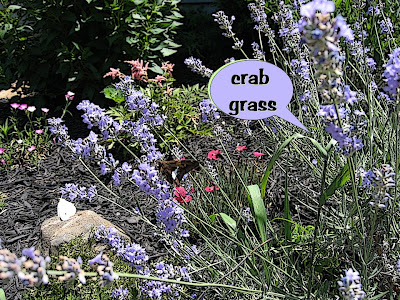 I dream about crab grass. What a pathetic confession! Crab grass slinks into my gardens, sending its scouts ahead of each invasion like spacewalkers suspended on life lines. Its tentacles lurk beneath the grass as it races to strangle all growth. I love growing things and have tried to live in harmony with crab grass, but it chokes out the blooms on my lavender, thyme, and yarrow and I hate it.

Night before last I took a break from pulling crab grass and walked around the neighborhood with a letter to our city council about our disgust with the way the developer at the end of the street is mutilating and overdeveloping a small plot of ground he wheedled out of the financially strapped school system without paying them any cash. There is so much wrong with this development, it's hard to articulate without beginning to splutter like Daffy Duck. Anyway, up and down the street I went looking for signatures on my letter. Apparently the developer doesn't read the papers or even look at the ubiquitous FOR SALE OR LEASE signs in the city and doesn't realize the real estate market is depressed, because he keeps gaily ripping down trees and playgrounds to build structures no one needs on not only this, but several sites in town. Deer are committing suicide on the freeway. See what I mean about the spluttering?

So, I approach a neighbor I've never really talked to before who is standing on his lawn with his smiling wife and adorable 18 month old. He is a young guy, overweight in shorts that might have fit him better last summer or the five before. His hair is leaving him. I explain the purpose of the letter, its 6 points including traffic snarls, flooding, lack of classrooms in overcrowded schools for the three story townhouses the developer previously assured us would be populated by retirees (see above on financially strapped schools). This is a lot like purporting that a used car was driven to and from church by a little old lady when in truth it was a rental car. Maybe this young man does in fact sell cars. At any rate, he knows the game and that we're being played. I want his signature.

I haven't heard the label "shine" since I was a kid, before the riots in Detroit. Before MLK professed his dream on the steps of the Lincoln Memorial. Before Brown vs the Board of Education, the exact same decision that was overturned by the Supreme Court this week, went head to head with the likes of George Wallace. For two days talking heads have been debating on the media whether race is still an issue in our "united" states. I want to introduce the Justices to this young man.

He said, "shines," and he looked at me hard as he said it. Measuring me? Daring me? His wife and child smiling at his side.

I stood silently as he signed the letter. I don't have to agree with him on everything, right? I don't have to make a scene in front of his wife and kid, do I? I can just smile, whisper insults under my breath, and live in harmony with his guy. I don't have to take on every asshole I meet. We can be in agreement on the over-development and disagree on race relations, can't we?

The letter feels dirty to me. It sits on the dining room table unsent. Evidence of a compromise that I can't square in my mind.

This neighborhood is being strangled by unseen tentacles, arrogant and bold. Words of hatred uttered by people wearing their patriotism and religiosity on their car bumpers. Uncompromising, bolstered by ignorance and unapologetic greed. It's always there, aggressively trying to choke out what could be beautiful. More than any one pair of hands can pull out.

It gives me nightmares.
Posted by sara holbrook at 12:17 PM 3 comments:

Everyday I read the Huffington Post the way my Dad used to read the Free Press in Detroit. Today I read that some high school scholars took Bush to task for his stance on torture, that politicians take money from big tobacco (like this is news?) and that Murdock is close to firming up his deal to buy the Wall Street Journal, which is just one more reason to get the news on line. I read the business section to see who has been arrested recently and the living section to investigate new ways to relax, which in light of the current news is a hot topic.

But when I saw on the front page today a picture to click to read about Paris Hilton's release from jail, I passed. Not because I wasn't at all interested, the story is like a flat tire on the side of the road, you glace over just because it is there. I didn't click on the story because I know somewhere, someone is counting. The people who choose the news are counting clicks and I don't want to add to the pile. Particularly since I read yesterday the Michael Moore was booted from an interview on Larry King where he was to talk about the health care crisis so that Ms. Hilton can tell all about how hot her prison cell is.

Mostly I get my news from Democracy Now, Huffington Post, Think Progress, BBC, and Alternet. Once in a while MSNBC. And of course, The Daily Show. These are channels my Dad and Walter Cronkite never dreamed of.

And before marketing moguls started counting clicks, measuring the next newsflash against how much interest a related story received the last time. How else can one explain Anna Nicole outplaying troop casualties on the nightly news?

I know, I know. The topic about as welcome as a nasty doormat. But unless we keep hosing it down and occasionally beating the tar out of the doormat, we are just going to keep tracking dirt in.
Posted by sara holbrook at 10:21 AM No comments: 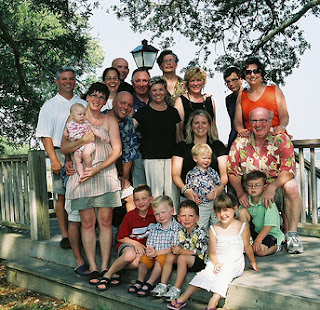 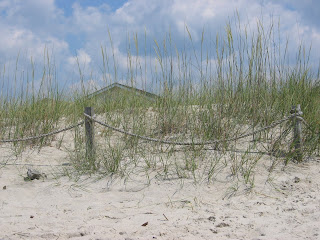 Our family flows toward the Atlantic each summer with our rafts, sunscreen and spawn. We go there to study our familial three R's, to relax, reconnect and recollect. Memories of past trips to the beach are filed in my head going back to when I used to hide True Story magazines under my mattress to be secretly studied with my cousins while the grown-ups drank beer and played cards in the swaying cottages we'd rent in places like Ocean City, Maryland and the Outer Banks.

This year (as in the past 3) we have trekked all the way to Oak Island, NC. I'm not sure how many of us were there in total, the extended family has a lot of extensions. But in our bank of four cottages we had twenty-one sun-toasted surfers.

Beyond celebrating the sun and the sand, we also celebrated my Uncle Bill and Aunt Sophie's 65th wedding anniversary with cake, barbeque, and two cannon blasts that rocked the iced tea right out of my cup.

Scottie (3) learned to ride waves, Steph (6) learned to body surf, Ben (7) learned it takes patience to fish on the pier, Thomas (2) couldn't get enough of the waves running headfirst, getting blasted in the face and popping up with a smile, wanting more. Danny (3) sat in his chair or played putt putt on the par 2 course his mother Kelly made for him. Frank (15) built Frankopolis, the deep sea fishing expedition brought in 200 lbs of fish now in freezers in OH and VA to be retrieved like a warm memory on cold winter nights. Sara Kelly (7 months) just bided her time till next year when the water will come to tickle her newly walking toes. And the grown-ups?

We rode waves of gratitude.
Posted by sara holbrook at 8:24 PM 1 comment: 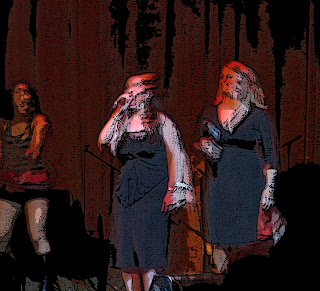 Everything in NYC is bigger, faster, brighter. After a day's work in Brooklyn, Louisa, Kelly and I supped at a little Italian (yummy) place and went to see Spring Awakening, which would later sweep the Tony Awards. Here's the truth -- I didn't love it. I liked it. But I wanted to LOVE it. One thing for sure, it made me want to return to the city immediately and see 4 more shows.

This picture is of Kelly and Louisa singing at a Karaoke place on Times Square -- what you can't see is that their performance was plastered on one of those mile high neon signs. They did Kelly Clarkson very proud -- and me too.
Posted by sara holbrook at 7:48 PM 2 comments:

Just back from a Janet Allen Institute in Florida. The skies were blanketed heavily with what looked to be rain clouds but turned out to be clouds of smoke. Florida is on fire, and you can smell it everywhere, even in the hotel room. Made me add a line to a poem about the environment about Florida catching fire.

I don't know if it was the smoke, the book I am reading (great book about boy soldiers in Sierra Leon, A Long Way Gone, see link above) with its vivid imagery of eyes dripping blood and children lost to bullets and cruelty, my general state of tiredness or staying too much up on the news, but I read too many dark poems in my set. That's twice I've done that this spring, here and in IL. I couldn't sleep last night worrying about it. The set and my state of mind that put me up to it.

At 4AM I was up walking Suzi through the quiet breaking dawn, listening to birds and trying to find my happy place. At this point I think I need a map and a guide to find it. One place I'm certain NOT to find it is on CNN or in a newspaper.

I need to move away from machines and take a shower of sun.
Posted by sara holbrook at 8:51 AM 1 comment: