Hate Was Not his Normal State

War is the Fiercest Art

The Luc Bat poet knew
His country broke in two, therefore
He had to go to war.
His wife and child, heartsore, waved bye.
The poet dared not cry.
He needed a clear eye to spill
Blood, strangers he must kill
To stay alive until the time
He could again in rhyme
Make images sublime. His heart
Was wracked and torn apart.
War is the fiercest art. Trading
Pen for gun, evading Death,
Armies invading. This hate
Was not his normal state.
One question would frustrate, for he
Knew not this enemy.
Might you love poetry?
I, too.
sara holbrook
America at War
ed. Lee Bennett Hopkins

When Lee sent out the invitation to poets to write poems to chronicle each of the wars that America has engaged in over its lifetime, I remembered a story I had seen on 60 Minutes (as I recall).  It told the story of an American soldier who found a book of poetry on a dead Vietnamese soldier, poetry that he himself was writing during the prolonged tragedy that we call the Vietnam War and that the Vietnamese call the American War.

In the story, the American soldier traveled back to Vietnam 30 years later to return the book of poetry and a photograph to the Vietnamese soldier's family.  I can't find a link on line, but I remember wondering as I watched the narrative: what would that be like?  A poet called to war?  In the US, some men and women served, but most did not.  There were no such choices to be made for the Vietnamese as the war exploded all around them. The image of a poet does not come to mind when we think of Rambo.

So, doing my best to follow the Vietnamese poetry form, I wrote a Luc Bat from that imaginary (to me) soldier's perspective, which now appears in Lee's book, America At War.  Luc Bat (to my understanding) means six eight, alternating lines of six syllables, eight syllables, with each rhyme repeated three times, interwoven and snaking down the page to whatever length the poet chooses, rhyming the last line with the first.

Last weekend Michael Salinger, Nancy Johnson and I were having a quiet dinner in Ho Chi Minh City when our young waiter whispered that the man sitting at a table in the back of the restaurant was a famous poet.  The young waiter,  Ngô Tiêů Lân, had studied him in school.  He explained that the poet, Nguyên Quang Sáng  had traveled to the US to read his poetry.  The 23-your-old spoke with great reverence.  When we told Ngô Tiêů Lân that we too were poets, introductions were made.  Pictures taken.  Friendly nods and smiles exchanged while Ngô Tiêů Lân busily translated.

After we went back to our table, Mr. Sang slowly came over to our table.  He wanted to talk about how the US and Vietnam were friends now.  We need to come together, he said.  Move forward together, he said, bringing his fingertips together in a tent.  He does not like to think about the war, in fact he comes to this restaurant on Saturday night to drink whiskey and forget about the war. 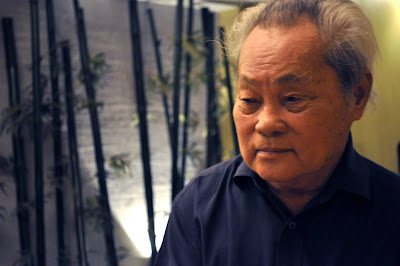 Mr. Sang is the winner of the Ho Chi Minh award that is only given every twelve years.  He is the author of not only poetry, but children's books, plays and movie scripts.  Not only did our young waiter know the significance of his contribution to Vietnamese literature, the desk clerks at our hotel were astonished that we had met him in person.  Where?  Where?  They wanted to know.

He is a poet who was a soldier because the times demanded it.

We paid for his whiskey.