The boy is right -- seems like everyone either loves or hates the president -- no middle ground. But unlike the way people either love or hate coconut, opinions swing wildly. I don't know if that reflects the fact the president is a moving target (unlike the flavor of coconut which remains pretty much the same and as long as you keep it away from my chocolate, I'm not going to pick up a sign and start marching on its hairy head). Or maybe it is more reflective of the fact that not only is the middle class evaporating, so is that wide swath that used to be called the middle ground. And that's not limited to politics. 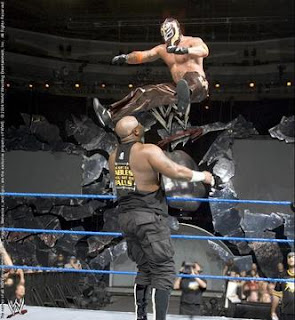 No one is ever mildly annoyed. They are either jumping for joy or mad enough to rip someone's head off, blustering around like some kind of Tanzanian devil. It's like our whole society has plunged into into a perpetual state of adolescence, wildly mood swinging through events until manic has become the new normal. Too much TV? Too many shoot your way to conflict resolution video games? Have pumped up World Federation of Wrestling Neanderthals winning through prat falls and intimidation become our role models for building community?

Whatever. Drama queens (and kings) are no longer the isolated firecrackers they once were. Attention seeking behavior has become routine and any activity is justified, whether it is eating bugs or scaring the socks off of someone, if it brings you a little fame. Where do you go next when fame and infamous collide?

I would hope people talk about this fourth grader and his question to the president, but they probably won't. He didn't kick him in the shins, throw a tantrum, or threaten Obama in any way. He left that kind of behavior to the grown-ups. He just posed a question, politely asking. He waited for a response. He listened as if he really wanted to know instead of counting the seconds to a zinger comeback.

Good kid. Good question. But not such good T.V.
Posted by sara holbrook at 7:44 AM 2 comments: 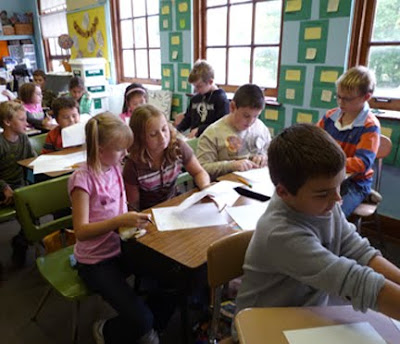 Austinburg Elementary is old school. Literally. It is a very old school. Tall wooden windows, a gym with a real stage at one end, heavy wooden classroom doors. I couldn't find an age on the building on-line, but I'm guessing the old girl is pulling up hard on a centennial. The steps into the front door are well worn, the secretary's office is the size of my dining room and just about as cozy. I loved walking in there, it reminded me of my good ol' Berkley Elementary where I went to school (now a parking lot, I don't want to talk about it.) 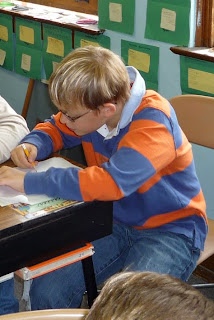 The kids were primed and ready. We had a laughing good time through three assemblies and then I got to meet with the fourth grade for writing. I have a special connection with this school as my nephew Edison goes there. The kids were anxious to write, we included good visual details and talked about how poetry writing doesn't have to be hard because you don't have to get it right the first time (like say, sky diving). If you don't like the way you wrote it the first time, move the lines around like Legos. Which is exactly what Edison elected to do with his draft.

Great job Edison and thanks to all the teachers who worked to make the poetry day a success. Posted by sara holbrook at 2:14 PM No comments: 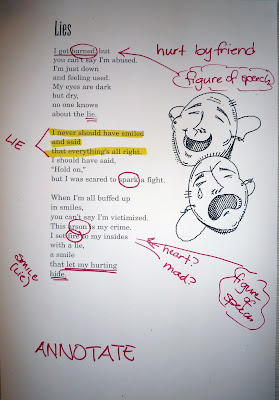 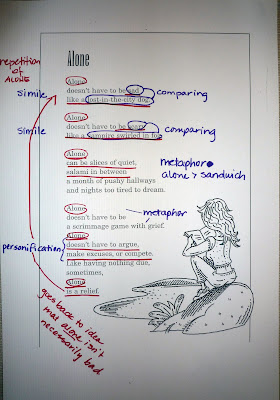 Today in Lakewood I met with the seventh graders, first in writing workshops and then for an assembly. In the course of our writing, one student observation stood out, "Poetry makes me less scared." Shyly, she whispered the line. I asked her to read it and read it again. One more time. I love that line.

Teachers Leslie Eiben and Trish Csongei had done a careful and fun job of preparing the kids for a poetry day -- enlarging a few of my poems defining feelings -- annotating them for better understanding, and then using them as mentor text for kids to write their own poems about feelings. Everybody was excited to see their poems posted for others to read. Now, posting poems in a middle school hallway identifying feelings may seem a bit scary in itself -- but instead it had the opposite effect as students were excited to point out their poems to others. Maybe acknowledging feelings in print really does take some of the scared away. How cool is that?

Sometimes kids will ask which age group I like the best and I always tell them that what I like the best is mixing things up. And that's the truth. Last week my first school visit of the fall took me to Edgewater, Maryland where I met with pre-K through grades 5. We played our tummies and played our lips, making the sounds of poetry. We had great discussions and I not only met some very dedicated teachers, this school has a very active parent group. One of the mom's brought in a poetry book written by her cousin, an Iraq war vet. Very powerful writing, the images still haunting me a week later. I regret that I forgot my camera!

I've been closeted with my computer through the month of September working on new books and thinking about school, vocabulary, poetry, and zombies (another story). It felt good to get back to school.
Posted by sara holbrook at 9:25 PM 2 comments: