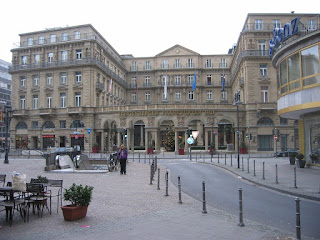 That little figure in the purple fleece is me standing in front of our hotel in Franfurt, which was not intended to be a stop on our way. This was not the easy part of the trip to Croatia. This was the smelly, expensive part. In fact, Michael wanted to burn that fleece. This was the part where our flight misconnected in Newark and we were re-routed through Paris on Air France (which I later heard has the nickname Air Chance) and they lost our bags for 4 days. We had a nice night in Frankfurt compliments of the airline and meandered along an outdoor Christmas market eating schnitzel and cocoa. Turned out this would not be the only outdoor Christmas market, we encountered one in Zagreb, Croatia and Trieste, Italy among other charming towns. Sometimes tragdies aren't as tragic as they seem at the time. Except for the part about how we had to buy new connecting tickets to Croatia which put a little dent in the credit card.

Frankfurt is very visitor friendly. Europe does public transportation so well. We took a train straight into the heart of the city to find our hotel and trained back to the airport in the morning to catch the plane to Croatia. Later in the week when we visited the International School of Zagreb, as the other students were writing about conflicts in their lives, I wrote about the lost bags. It should be pointed out here that students at International Schools are often seasoned international travelers) When we all shared our writing, one student shook her head empathatically as I read my poem and said sadly, "the bags never leave Paris."

Unfortunately, she was so right. Well, not never. But 4 days is a long time to wait for your clothes while wearing the same purple fleece.
Posted by sara holbrook at 7:28 PM


well tell me if u like it
peace out ♥ rebecca