Croatia does dark like West Virginia does dark. Real dark. Mountainous dark. Winding two lane roads through total blackness. Dark. So when we finally reached the outskirts of Pula after passing countless exclamation point signs and 20 (you read that right) tunnels en route from the airport in Zagreb, we really felt like we'd accomplished something. Those exclamation point signs have no explanation, by the way. They just appear beside curves and construction sites as if the road is agrees with the travelers and is screaming "Wow" as they pass.

But, then we had to connect with Kathy and Steve who were living in a no number house on a no name street. Thanks to a cell phone connection, we rounded curve after curve on what appeared to us to be a bike lane instead of a road and made one last sharp right hand turn at the church and there they were, standing beside the road wearing their 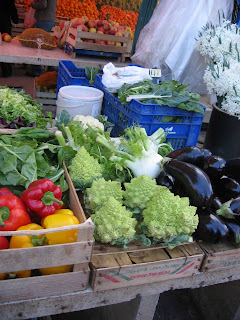 best, warm but shivering Cleveland smiles.
The unfortunate thing was that the house was temporarily out of oil for hot water and this was Sunday and we were still in the same clothing we had left Cleveland in on Friday. But, hey. On vacation, right? We went to the open air fish market the next morning. Pula's main industry is fishing and tourism. Lucky for us we were not there in high tourist season, so we had more of a real life experience. Kathy had managed to master enough Croatian to negotiate our fish and vegetable purchases, so we were fat city that night for dinner. Anybody know what those green pointy thingie's are on the vegetable table?
We also made our initial acquaintance with the town of Pula, which has been a port of some renowned since ancient Roman times. Istria, the little part of Croatia where we were visiting, has alternately been part of Italy, Austria-Hungary, Yugoslavia, but appears to best like being simply Croatia. You know how in the US if a city building is 50 years young it is labeled too old and often torn down? Not in Europe. To them, recycling is not just a recent fad. They've been conserving and reusing for centuries. We were to discover ancient churches and fortresses, narrow cobblestone streets, all still functioning very nicely without the benefit of vinyl siding or plastic window frames. By far the most amazing site was the remains of a Roman Colosseum. 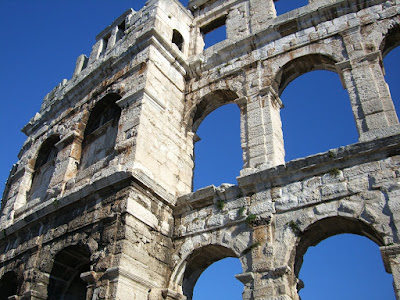 I have to say something here about Adriatic Blue. We don't do blue justice in Cleveland. Lake Erie blue is too often a tinted shade of gray. This is not photoshopped in anyway, this is the blue that was. Rich as it was enriching.

Posted by sara holbrook at 7:53 PM

While in Ireland, the phrase we heard was "In America, you think 200 years is a long time. In Europe, we think 200 miles is a long way."

That is SO true. We considered renting a car in Frankfurt and driving to Pula after missing our flight, and the lovely lady at the Hertz counter looked at us with absolute horror. I don't think it was any further in miles than from Cleveland to say Boston, so it seemed like a piece of cake. Well, except for the part about the Alps. Anyway, she talked us out of it.

Hi Sara! Nice to hear about your trip! The vegetable is Broccolo or Romanesco, a hybrid between broccoli and cauliflower, that can be used the same way as a cauliflower. The taste is mild and nutty. http://www.theworldwidegourmet.com/
vegetables/cabbage/romanesco.htm

Uhu, sorry it is not "Isteria" but ISTRIA.