Traveling through Kazakhstan with Lenin 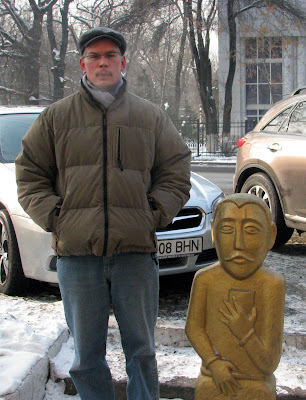 Alamty, Kazakhstan does not have soft edges. It is not warm and fuzzy. The sharp air that pinches the nose matches the looks from strangers pushing in line and the spike heels on the women’s boots. The straight lines of the Soviet style high rises are persistently drab in a public housing sort of way and the traffic is merciless. Tension still exists between the Russians and the Kazaks and walking around in public with Michael attracts attention -- the consensus is, he looks like Lenin. When the driver told him that we thought it was an abberation, but then it turned out to be unanimous.

The internet connections are uniformly lousy. The wireless at the hotel was so slow I wanted to slit my wrists and most people here pay for their connection per download. I’m not quite sure what that means, but I think it means you don’t just cruise around reading using your stumble browser. We are having a good time, but it is because of the people we have met at the school, not any kind of delight in the surroundings. The cold ranges from shocking to piercing and the smog is so thick that we have been able to even see the mountains since Wednesday.

Last night after the conference wrapped up, Michael and I spent some people-watching time at the mall. Imagine a mall populated by families and the usual proliferation of teenagers where a DJ sets up at 8:00PM and appears to just get rolling. Also try to imagine all these teenagers (lots) and not one single hoodie, no slouching balloon pants and all the girls in tight jeans and spike heels. The spikes are pencil thin and defy logic. Black is the uniform color rather than sweatshirt gray. None of the kids are overweight nor are the girls adorned by the characteristic American muffin top over their jeans. The kids seem affectionate to one another, girls often walking arm in arm or holding hands. There were no inappropriate displays of affection the mood and voices hushed with none of the loud posing that goes on at our local mall. This mall, that seemed so familiar in many ways, was also clearly not.

We were fresh from a dinner at an Italian restaurant where I had no hope of reading the menu and ordered what I thought was spaghetti with tomato sauce and turned out to be dark green spinach pasta with small salmon chunks, roe and a rich white sauce. What an insanely pleasant culinary surprise. And then I decided I had a taste for chocolate and attempted to buy an overpriced ice cream cone, but gave up as one person after another crammed in front of me. People here have a heritage of fighting their way to the fronts of food lines and the concept of lining up and taking turns is as foreign to them as the print on the Baskin Robbins menu was to me. I satisfied my need for chocolate at the grocery instead. The checkout girl was brusque, but at least I got waited on - even though I was traveling with Lenin.
Posted by sara holbrook at 8:48 PM

Oh my. You know, ordinarily I would not say that Michael looks like Lenin. But in that picture...it's a little eerie! Loving your postings.

Oh how funny! It's strange to be in a homogenous country, no? Or is it homogenous?

Even the teenagers have a sense of style there -- it's amazing how sloppily we dress here. My feet simply could not take those heels, however. The population seems to be a mixture of Kazakh, Russian and Asian -- not sure of the percentages, but a stroll through the market reveals all types.