One Gong or Two? 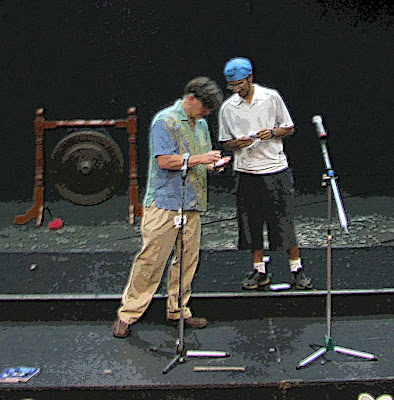 "Everybody take out a piece of paper and something to write with." So begins the writing workshop. Michael and I conducted about 20 workshops at JIS Middle -- lots of students, lots of pens on paper. Some of the poems I never heard because the writers were too shy to share. Others flew by in presentation almost too fast to hear (pacing, pacing). In the end, everyone got something written and hopefully gained some confidence in their own ability to organize thoughts and commit them to paper.
At the end of the week the students participated in a series of poetry jams -- not really slams. But the audience was still involved as they cheered for each poet to receive one gong or two from the giant gamalong on stage. Due to the inevitable reality of score creep, we were up to 5, 6 and 10 gongs by the time each class period ended.
Two girls (separately) were so freaked out by the idea of live performance of their own poetry that they were actually sobbing when it came their time to read. But each girl DID IT. Everyone marveled at their courage (6 gongs!)
There were many great poems throughout the week and it really is impossible to choose just one to feature as an example, but unfortunately there isn't space here to publish them all. Eighth grader Simran Ahluwalia's poem was powerful when he read it in class, and then again at the end of the week. I asked Simran (pictured above with Michael) to share a copy of his poem with me so I could post it here. His teacher Scott Chamberlain forwarded it on. Like many of the JIS students, Simran has mastered English as a second language, which makes his composition all the more exceptional.
In the depths of the abyss we call a brain,
In the left half lays the most powerful psychological weapon.

Creativity is a rainbow coloured sword,
A sword which brings all knowledge to its knees.
Sages of the coloured art speak out against the box,
The box which keeps uniform and order.
To have creativity is a curse once you show it,
Public want more and more of it.
A masked poison to keep unicorms alive,
Used by war departments to inflict maximum pain.
Simran Ahluwalia

To all the poets I met at JIS, I say thank you for sharing a little piece of yourselves through your poetry. Special thanks to Simran for allowing me to share his poem here.
Posted by sara holbrook at 8:18 AM

By the way, Simran intends to become a scientist - another career where concise and descriptive writing will bode him well.

2 good looking dudes there, and a fine poem.