You are Welcome in Marrakech

This is Morocco -- food and frenzy. Everywhere "we are welcome," which generally means, do you want to buy? We were met at the airport by our hosts in Rabat, and after a relaxing two hour lunch, wandered the medina where Cynthia helped to introduce us to the culture before we took off on our own to Marrakech. The next morning we took a 3 hour train ride to what has to be the shopping mecca of the world. Our rabat (bed and breakfast) met us at the train station. Good thing, because there isn't a chance in the world that we could have found this place on our own. Below are some pictures, but mostly I have just been directing Michael to "take a picture of that!" so more pix on his blog. 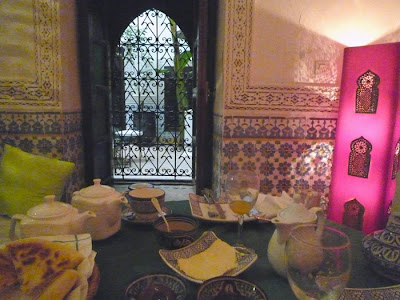 This is the breakfast room at our Riad Al Mamoune. Gotta love the internet. Part of what sold us on this Riad were the reports of the good breakfast and the crepes are indeed light and perfection. The staff is extremely helpful. The only drawback is the walk back at night down an unlit tunnel of an alleyway.

Marrakech is not just a place where things are sold (although everything including what is nailed down seems to be for sale) but also where thing are being made. Leather coats being sewn, weaving, metal work, old tires being turned into stools, stitching and beading -- all in process. Here men are making tiles in the morning light. 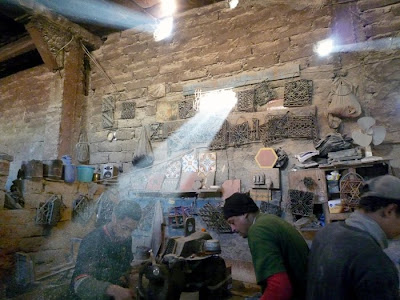 We spend an afternoon at the Palace Bahia -- home to a long gone king and his four wives and gaggle of concubines. No furniture, apparently they fled with all the goods before the guy turned cold. But they couldn't strip the place of it's intricate tile and wood working, which is beyond impressive. Here is Michael in what he calls his Bollywood movie poster pose. 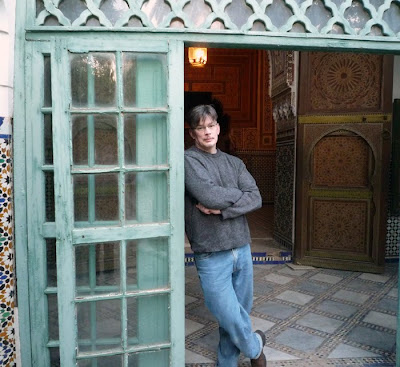 In the ancient palace there was an exhibit of modern art -- one picture, true sentiment.

The food must be really good. You mention it in almost every communication. The country looks very beautiful in an exotic sort of way. Have you bought anything? What's the weather like? Do you have to drink bottled water?

Wow - what an amazing pic in the tile factory. What a world!