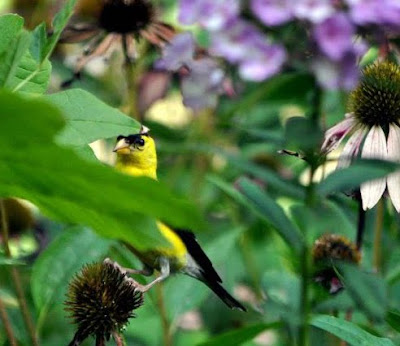 On Sunday Michael and I, along with 3 other Cleveland poets will be honored to read poems of our choosing at a Cleveland Orchestra Concert commemorating 9/11. The poems I chose were Jerusalem by Naomi Shihab Nye and Reality Demands by Wislawa Szymborska and a sonnet of my own. I am posting the poems by the other poets here because they are available elsewhere on the net. It promises to be a solemn event, but also uplifting.

"Let's be the same wound if we must bleed.
Let's fight side by side, even if the enemy
is ourselves: I am yours, you are mine."
-Tommy Olofsson, Sweden

Once when my father was a boy
A stone hit him on the head.
Hair would never grow there.
Our fingers found the tender spot
and its riddle: the boy who has fallen
stands up. A bucket of pears
in his mother's doorway welcomes him home.
The pears are not crying.
Later his friend who threw the stone
says he was aiming at a bird.
And my father starts growing wings.

Each carries a tender spot:
something our lives forgot to give us.
A man builds a house and says,
"I am native now."
A woman speaks to a tree in place
of her son. And olives come.
A child's poem says,
"I don't like wars,
they end up with monuments."
He's painting a bird with wings
wide enough to cover two roofs at once.

Why are we so monumentally slow?
Soldiers stalk a pharmacy:
big guns, little pills.
If you tilt your head just slightly
it's ridiculous.

There's a place in my brain
Where hate won't grow.
I touch its riddle: wind, and seeds.
Something pokes us as we sleep.

It's late but everything comes next.

Reality demands
that we also mention this:
Life goes on.
It continues at Cannae and Borodino,
at Kosovo Polje and Guernica.

There is a gas station
on a little square in Jericho,
and wet paint
on park benches in Bila Hora.
Letters fly back and forth
between Pearl Harbor and Hastings,
a moving van passes
beneath the eye of the lion at Cheronea,
and the blooming orchards near Verdun
cannot escape
the approaching atmospheric front.

There is so much of Everything
that Nothing is hidden quite nicely.
Music pours
from the yachts moored at Actium
and couples dance on their sunlit decks.

So much is always going on,
that it must be going on all over.
Where not a stone still stands
you see the Ice Cream Man
besieged by children.
Where Hiroshima had been
Hiroshima is again
producing many products
for everyday use.

This terrifying world is not devoid of charms
of the mornings
that make waking up worthwhile.
The grass is green
on Maciejowice’s fields,
and it is studded with dew,
as is normal with grass.

Perhaps all fields are battlefields,
all grounds are battlegrounds,
those we remember
and those that are forgotten:
the birch, cedar, and fir forests, the white snow,
the yellow sands, gray gravel, the iridescent swamps,
the canyons of black defeat,
where in times of crisis,
you can cower under a bush.


The charred remains of one more bombed out bus.
A swat team storms, a hostage sits alone.
Another hidden camera shot of thugs.
Amber Alert! A child’s been snatched from home.

Some loner kid went postal up in Maine.
Explosive vests? Is everyone extreme?
Death threat! A woman’s clinic up in flames.
More bad news from the flat screen fear machine.

How many died from that last IED?
I can’t take more. I mean it. I am done.
The information age is killing me.
I leave to take a shower of pure sun.
Oblivious, some bird with open throat
starts up a symphony of joy and hope.
Posted by sara holbrook at 9:17 PM

Hey Sara, Very interesting poems. I like your poem very much. Thanks for sharing such lovely poem with us. Keep Sharing...

Yours is the best one. Just saying.

Its really a nice poems..Very interesting to hear..And a great collection done by you..keep it up...

Your Szymborska poem is cut short here:
After "...you can cower under a bush.", it continues:

What moral flows from this? Probably none.
Only the blood flows, drying quickly,
and, as always, a few rivers, a few clouds.

On tragic mountain passes
the wind rips hats from unwitting heads
and we can't help
laughing at that.

Nice I like Blog is good Movers In Dubai