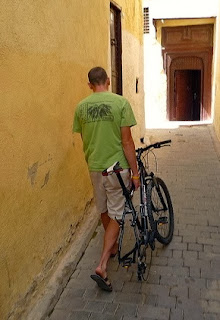 No one climbs aboard a bicycle and proclaims, “I want to crash and fall on my head.  Bring on the broken bones.” No one puts a cake in the oven hoping it will come out burned black and tasting like a hockey puck. Likewise, people don’t get married because they want to get divorced.  If they did, American Tuxedo would rent helmets.

When a marriage crashes or turns into a hockey puck, it isn’t because the partners want it to happen.  Divorce is like volunteering for amputation without the anesthetic. Who would ever wish for that?

My parents were divorced. I was an adult when it happened, but that doesn’t mean it was easy on me. My marriage also ended.  Didn’t want either one of these things to happen. Just did.  Today I can say, I am pretty glad things turned out as they did.  I like my life.  But, I can’t say, could never say, that I wanted divorce to be part of who I am.

So this knowing was the impetus for my poem, Wanted.  Today, that poem is wanted by teachers in Michigan as it (unpredictably) is a component in their state standards.  The state didn’t choose to provide the poem to teachers for classroom use, they just assigned it.  Unfortunately the book that originally contained the poem has gone out of print.  So teachers have been writing to me (apologetically) asking for the text of the poem. 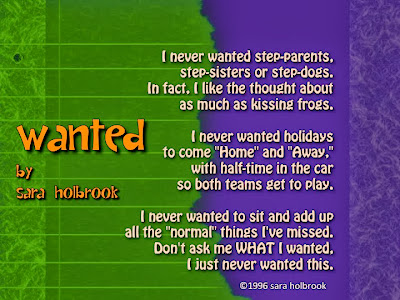 Some would say (and have) that divorce is no topic for kids’ poetry.  Kids’ poetry should be about balloons rising, spinning till you fall over, or castles in the air, in ancient times, in Spain. Anywhere and anything except the dismemberment of the castle in which a kid currently resides.  It’s true that the poems that pop out when pulling your finger out of your nose are funny (perfectly okay with editors) and a (ick) represent a pretty universal experience, it’s also true that divorce happens.

In my world, real happenings are the stuff of poems. I spent about 15 years writing poetry in my kid voice before I had anything published.  I had never been to a book fair or teacher’s conference where children’s poetry was discussed.  I didn’t know writing kids’ poetry came with a set of rules having nothing to do with iambs, quatrains or free verse.  I didn’t know there were topics that kids’ poets just didn’t write about, like divorce. Death and war are okay topics, but only if they are old news, not breaking news.

My first editor suggested I divorce all my divorce poems from the others and make a book of poems just on that topic.  My response was a big no to that idea.  I mean, seriously.  Who would check that book out of the library? After I wore that first editor out, the second one suggested that since she had an intact marriage and so had her parents (lucky her, exactly the opposite of my experience) that only certain kids would be able to identify with the topic of divorce and therefore, poems on divorce should not be included in any collection.  “You have a skewed perception based on your experience,” she told me, “Most kids are happy.”

“Not in my neighborhood,” I said.  True, I may be a little askew, but what do I have except my own perception?  From what I could see, divorce had touched the lives of every kid I knew, if not their own parents, then a friend had moved away, a cousin got squirrely, a friend wound up in tears at school, even grandparents have been known to split up.  Besides, nobody as in NOBODY is happy all the time. I got a third editor.

One reviewer suggested when my book Am I Naturally this Crazy was published that I was making light of kids' feelings because I used rhyme in this particular poem.  No rhymes allowed when speaking of divorce to kids?  Who wrote that rule?

Crazy even got banned in one district that I know of because not only did it contain a poem about divorce, but also about a current war (double whammy).  Writing about divorce, a rather tight-lipped librarian explained, meant I was “anti family values.”  Did she mean I didn’t value my family because we spread ourselves over two houses? Where do people get these ideas?

Funny how a few words arranged in shortened lines can take on a life of their own. Since the book this poem first appeared in is out of print, this particular word collection is hard to find.

I may never have wanted to know about divorce, but I do want teachers and kids to have access to this poem.
Posted by sara holbrook at 8:32 AM

Thank you for this post and your poem, Sara. This is an important poem and topic and heartfelt from one who has walked in the shoes. I will be sharing this. I think everyone should see this. Life is hard and no one said it would be easy. It's complicated, right? And kids need to know they are not alone.
Janet F.

Hi Sara, I met you this year at NCTE, the night you were with Jane Yolen and her daughter, David and Sandy Harrison, and others. Janet (above) posted this on Facebook. Just wanted to say that I taught middle school aged kids for a lot of years (am now a lit coach) & nearly every year I had kids who came in to tell me their parents were divorcing. One year, I had three who told me they found out during Christmas break. Through all my teaching time I used poems like yours all the time. Kids need to know others are there, at least trying to understand their lives, even if they don't exactly respond, they remember. Thanks for this, you're so right, & I don't know who makes those rules, but I also know I don't have to follow them.

This is a really touching poem! It really speaks to the emotional turmoil that people of all ages go thru. Since more than half of marriages end in divorce what are we trying to protect kids from when your poem is banned!