Trieste, Italy and beyond 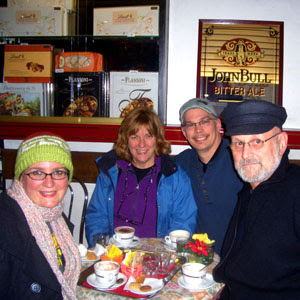 When we boarded the Croatian Airlines flight from Frankfurt to Zagreb, all these men started boarding who were quite tall, high cheek bones and narrow eyes -- just like Michael, whose grandfather came from Croatia. It was as if we had found his tribe. Cross the border into Italy and genetics takes 6-8 inches off of the men and then places them all on motorbikes with the idle set on breakneck. Trieste also had a Christmas fair, great yarn and the best cocoa that I've ever tasted. I wish we had had more time to explore. Here we are in a coffee shop with our friends Kathy and Steve. I wouldn't say that the cocoa I was drinking was thick, but you could practically stand a spoon up in it.
On our drive up to Trieste, we stopped off to see the tallest Church in Istria, the 18th century Svetog Blaza. The guidebook said that it howed a great collection of religious relics and other treasures. But mostly we stopped there for a viewing of the Vodnjan mummies, the bodies of important dead 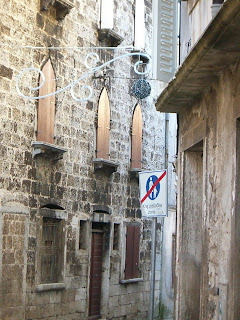 clergy, displayed in glass cases and supposedly impervious to decomposition. Surreal, but not something one encounters in Toledo. We knocked on the church doors, but no one answered. Finally, someone in the almost deserted square suggested that we try knocking on the door of the home of the priest. He assured us it would be okay, so we ventured down this narrow, cobblestone passageway (I think residents might consider it a road) and knocked. Knocked again. One of the shuttered windows swung open and as if from a coo-coo clock a head emerged. She was barely tall enough to see out the window, but as she shook one arthritic finger it was as if she were saying, "you may not see our dead today." And then she slammed closed the shutter. The priest may live at this address, but clearly she was the one in charge, so we did not see the dead.
On to lunch in Porec, a charming sea side town where we had the best lunch of the trip. Why do we put up with such inferior food in this country? Fast food isn't even worth mentioning, although an outlet exists on every corner. One step above that you have the Applebee equivalents where the food is all prepared in Kansas or somewhere and shipped to be thawed out in less than 20 minutes. And we eat this, when the alternative is food prepared with ingenuity and unimaginable variety at local small eateries. I wasn't once tempted to order a chicken Caesar salad as the lesser of all evils and even though we ate well, I actually lost weight while abroad. We need to get our groceries in order.
I regret not having pasta in Italy, which means I have to go back -- and soon.
Posted by sara holbrook at 12:45 PM

♥I love your Blog♥

Hello, I enjoy reading all of your article. I wanted to write a little comment to support you. Best regards, Anna from สล็อต