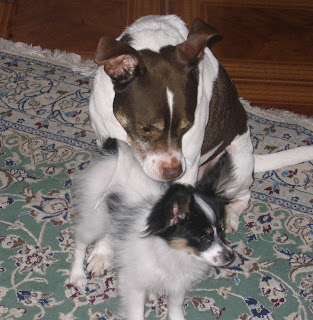 This is a picture of Hector (big dog) and Suzi (little dog). They come from totally different hoods. Hector is from East 185th Street in Cleveland and has a lot of what you might call street smarts. For instance, he was homeless and looking for a place to hang out and when he saw a Home Depot he must have thought that that was the place to shop for a new home, because we met when he chose my leg out of all the other shoppers to lay his wet nose against while I was shopping for wingnuts, hence his name: Hector Wing Nut Rodriguez. He is a kind and gentle big brother to Suzi, who came from the other side of the tracks so to speak.

Suzette Creme Fromage is her full name, or Suzi Cream Cheese. (That name came from a Frank Zappa song as a suggestion from Michael and it fits perfectly). Also, Suzi was my mother's name. She has a long pedigree of champions, is only 4 lbs and believes she is not only a princess, but boss of the house and probably the world. Her breed is a papillon. Papillon is french for butterfly and that fits because she has butterfly ears and she thinks she's all that because of them. The word is that this is the type of dog that Marie Antoinette carried with her when she lost her head.
But as a perfect example of how different breeds, from different neighborhoods, indeed different countries, with different pedigrees and expectations do indeed have similar tastes, they conspired against the authority (me) pulled a box from under the cupboard and gleefully started sharing a meal this morning while I was brushing my teeth. All very understandable.
But S.O.S. pads?
Posted by sara holbrook at 10:16 AM

hey was up you r coming to our school tomorrow and i really wonted to know if u had sons instead of daughtors would u still have wrote poetry????well hope u answer my ? by the way my names rebecca thanks for comming peace out
♥

what your dogs doing

lifes to short to wake up one morning with regrets. so love the people who treat you right && forget the ones who don't and believe the everything happenes for a reason if you get a chance, take it. if it changes your life, let it. nobody said that it would be easy they just promied it would be worth it
♥

heyy sara!! <333. well i just want to tell you that i just love your poetry and i think that your one of my favorite authors now!! i hope you write many more books!! [[oh and by the wayy, you're comin to our school this week! i can't wait!!]] =[)now thats a happy mexicans!

Hello Ms.Sara Hilbrook,
I am a student at White Knoll Middle School and I love ur poetry.You inspire me alot.I will remember this experince when you come down here to South Carolina.I also think your dogs are adorable. God Bless You and your family. much love

Both Hector and Suzi are so cute... Muaaaah