Oh, hark!  I hear the conversation leading up to the inclusion of William Blake in the Common Core State Standards (CCSS) Appendix of recommended literature for fourth grade.


Here’s a poem about a park.  Fourth graders like to play in the park.


Not in my neighborhood, they mostly play video games.


But it would be better if they played in the park, so let’s go with it.


William Blake.  I’ve heard of him.


THE William Blake of the 18th century?  The nutter who espoused free love and eschewed the church?  That William Blake?


Yes, that’s the best part.  He's out of copyright.


Didn’t he have hallucinations about talking to angels in trees and God sticking his head in his bedroom window?


Look! He made a bunch of pictures to go with his poems.  A model for students illustrating their own poems.


Luckily most of his artwork will be blocked by elementary school search engines.


We don’t have to look at his artwork, we can just talk about it.  And look here, 12,462 PhDs have written their theses on him.  This guy is a great topic for online research assignments.


Most of those papers were written about whether or not opium influenced his writing and artwork.


A cross-curricular connection for science class!


He thought marriage was institutionalized prostitution.


That works right into our social studies unit on slavery.  Do you see any math connections here?  We might have a home run.


Look, I just don’t think this guy is very good.  Most of his rhymes are too predictable and these couplets don't work at all:


The skylark and thrush,
The birds of the bush,


Till the little ones, weary,
No more can be merry:

He’s quirky, I’ll grant you that.


Since 1820 every educated person has had to study Blake.


Not in fourth grade alongside Ramona and The Hardy Boys.  Even his contemporaries thought he was a mediocre poet and a headcase.


That was before he was dead, what did they know?  Stop trying to buck the system.  How else will we prepare them for seventh grade where he appears again rhyming “eye” with “symmetry?”


Can’t we find a poem more relevant to kids’ lives rather than this thing written through the eyes of two bitter geezers leering at kids in a park discussing their youth-time?


He was a free thinker, he didn’t bow to the wishes of others.


Are you saying we should include him just because he is like the honey badger?  What about poetic form?  About relevancy of content?  About his themes?


The man was English, he is old, and he is out of copyright.  What more do you want? 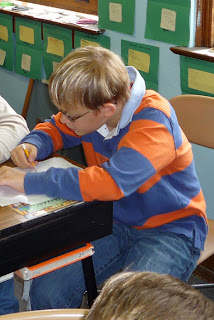 The sun does arise,
And make happy the skies;
The merry bells ring
To welcome the Spring;
The skylark and thrush,
The birds of the bush,
Sing louder around
To the bells’ cheerful sound;
While our sports shall be seen
On the echoing green.
Old John, with white hair,
Does laugh away care,
Sitting under the oak,
Among the old folk.
They laugh at our play,
And soon they all say,
‘Such, such were the joys
When we all—girls and boys—
In our youth-time were seen
On the echoing green.’
Till the little ones, weary,
No more can be merry:
The sun does descend,
And our sports have an end.
Round the laps of their mothers
Many sisters and brothers,
Like birds in their nest,
Are ready for rest,
And sport no more seen
On the darkening green.

Perfection! I do fear for so many wonderful genres and forms that will be killed with CCSS.

Sara, you have given me my biggest smile of the day. You are wickedly clever.

In the liner notes on the back of one of Country-Gospel composer Marijohn Wilkins's albums, Kris Kristofferson quoted Blake:

That hit me like a ton of bricks. Those who have been there know exactly what he is talking about.

sara holbrook said...
This comment has been removed by the author.
8:44 PM

I agree, Anonymous, that is a beautiful line. Blake has indeed contributed to our canons of English Literature. After all, this is the man who brought us the albatross as metaphor.

However, not many 10-year-olds have "been there" nor is there a line of such beauty it in this particular poem. I fear it will hang heavily around the necks of young readers.

Coleridge gave us the albatross (Ancient Mariner and all thst). At least the kids are reading poetry. It beats an anthology and "workplace documents," which is what middle schoolers here are getting. That and "21st century skills."

Whoops, you have two "Anonymous" writers. I am the second one and I teach high school English in northern California. The last ten years have been a long, strange trip for those of us in education and that includes the kids, too. However, pretty soon the educrats and their pet philanthropists will have developed an online system that will be "teacher-proof"--an expression I have heard my principal use. God help us, every one.

Ha! I'm laughing at myself and my faulty memory, it might be time for me to revisit the Romantics! College was a few years ago, and I (one humble person) think that is where Blake belongs. And just because he has things to contribute, that doesn't mean that everything he wrote was sterling or engaging to fourth graders, invites deeper thinking, or that it is a good vehicle for teaching poetic language. s.