Writing from the Outside In 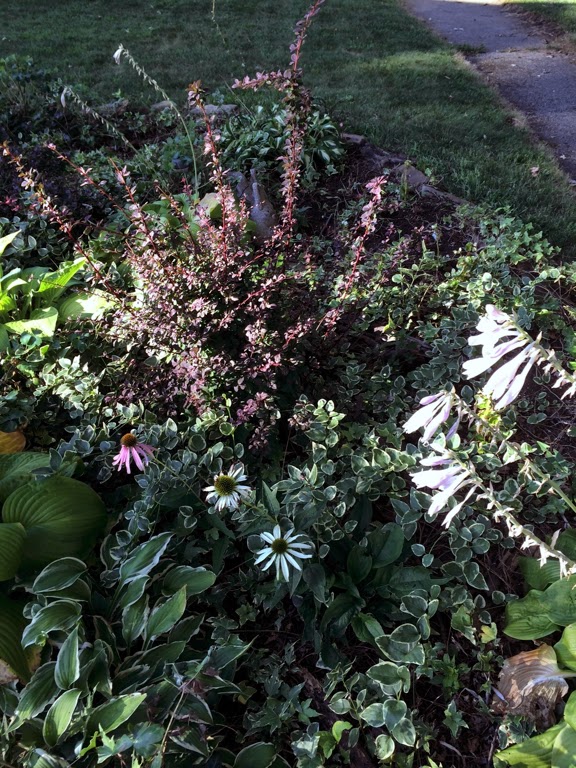 There are no less than six books titled Writing from the Inside Out, probably more.  The phrase is so universally accepted, it’s almost embarrassing to raise my hand and say, Yeah, but . . .

Yeah, but that’s not the way I write.  My writing process goes like this, I see something, an image or an interaction, and then it triggers a response in me (Are you kidding, me? Gross! Wonderful! or Horrifying) and then I write about it.  Writing from the outside in.

So, today I decided to revamp my blog (hope people like it) and challenge myself to write on it once a day for a week.  A new poem every day.  I know that other poets do this for a month or more, but the pressure! The pressure!  I thought, maybe I could handle a week.  What to write about?

Well, I looked around and got as far as the perennial garden septembering in the front yard.

Oh, yeah. It’s September! Time for kids to start school, pack up the shorts and sleeveless shirts, harvest tomatoes, and trim the barberry.  The barberry bush in the front perennial garden it all uneven and grows at astonishingly different rates.  Some branches bolt while others are content to pop out a few new leaves and call it a season.

Aesthetically I like a loosely rounded mound of bush, so I trim back the wild hairs.

Which is why a barberry bush is NOT like a classroom.

No matter how tempting to
round out the children
into a balanced arrangement,
to tidy the garden
with standardized hedges,
outlining a pre-ordered path,
a child’s bloom sequence
can’t be projected,
and set out in symmetrical rows.
Formalized flowerbeds
draw nodding praise from those
who have mostly forgotten,
the uneven feel of the earth
on bare feet and
that gardens grow
best and brightest
when we nurture and feed the roots
instead of confining ourselves
to relentlessly shearing the shoots.

Michael spent the morning weeding the garden and I spent the afternoon writing a poem about the garden.  We'll have to sort that out later.

Posted by sara holbrook at 7:01 PM