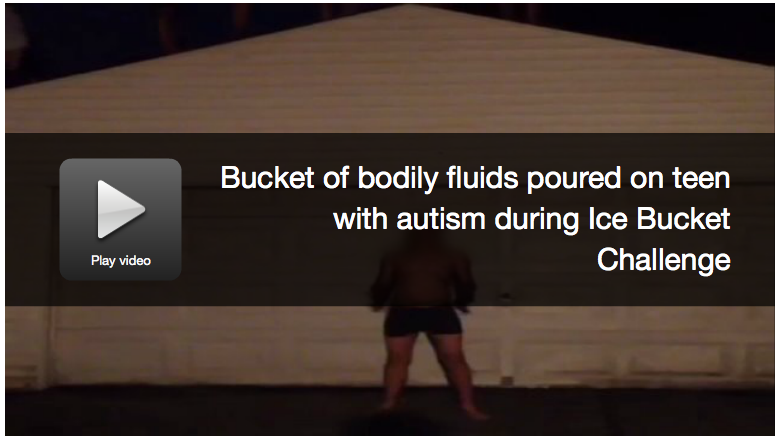 Following the Michael Brown tragedy, people have been talking a lot about privilege.

Well, folks, this video is what the voice of privilege looks/sounds like when the speaker thinks only the like-minded are in the room.  The voices who see themselves as physically, financially, racially, mentally superior. Those who believe they are only speaking to the "haves and the have mores" to quote George W.  So sure of their own positions and their right to exclude others, they want to make sure everyone else knows their standing, and that that standing has put them in position to pour crap over others.

Look at me! I am above. Let me prove it to the world!

This is what racism sounds like at an all white cocktail party in places like Bay Village, it is what ageism sounds like at the gym, it is what lunch sounds like with a bunch of wealthy lawyers talking about the poor. How do I know? I've been there, and while I work very hard at not being hurtful in my words or actions, too often I have born silent witness to the hurtful actions/words of others.

What happened to this innocent is what metaphorically and actually happens when a collective prejudice trumps people relating to one another as individual human beings. Not on the other side of the planet, but in our own backyard. And when an outsider (maybe a bartender) turns on his cellphone to record what actually goes down behind closed doors, or a cable news network catches a white cop pointing his gun and threatening to shoot black citizens in our streets, everyone is publicly horrified.  But privately? Well, we've got shit to do. Can't be bogged down. Besides maybe someone else in the room might have a job connection in the future. Speaking up would just make the remainder of the time uncomfortable, and you can't change the mind of a jerk like that anyway. Can you?

I better let it go or someone will pour crap on me, and boy howdy, I don't want that.

The perpetrators of this crime were just young, that's all.  They were unsophisticated enough not to be able to foresee that this just might not play well to a general audience. After all, their peeps thought it was hilarious.

When a hate crime happens so close to home, we must all bear some of the shame, because these criminals are young, not fully formed. They are acting out what they have learned from role models, real or virtual. Somewhere they got the idea that this was "just a joke." Anything goes as long it's just a joke, right? Well, no, of course not. But how did they never get that message? Where on earth did they get the warped impression that this was okay?

When something like this happens, we need to look at ourselves as a community and ask, what part did I play in creating an environment in which this happened? When was the last time I stayed silent when I should have spoken? Did I do something purposefully hurtful and laugh about it? And finally, what will I do the next time I hear/see crap being poured on a fellow human being?

I confess, I have not watched this video.  I did read the print description. I hope the perpetrators of this hate crime are apprehended and punished. I hope people talk about this with their kids, the crime and the punishment. I hope we can work together to build better role models.
Posted by sara holbrook at 2:12 PM

Thank you, Sara, for your insightful statements. As the grandmother of a special needs child, I cringe every time I hear of incidents where our special kids are picked on. I want to wrap my special boy in a cocoon and protect him from such cruelty. When I was teaching, I saw many acts of violence against kids by kids. Will it never stop????

This is not something a rally or donations to a charity is going to solve. Why is it so often the first response is to try and buy one's way out?

More than anti-bullying we need pro empathy. If these kids possessed a shred of ability to put themselves in another's shoes this would never have happened.

It takes a culture of identifying "the other" in order for this to happen. Once you've dehumanized someone to the point of dumping feces and garbage on their heads - how far away is cutting of that head?

I hope folks in the community take this seriously beyond protection of their own reputations.